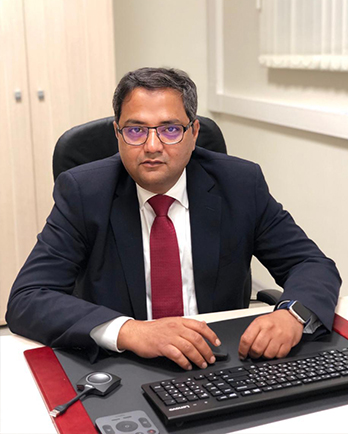 As part of a group that believes in absolute standard of quality, innovation and service, Flex Films enjoys the largest market share of PET Films in Russia. We are determined to continue the tradition, offering nothing short of the best to our customers that facilitate their business and sustainability goals.

Junaid Khan began his journey with UFlex almost two decades back and since then there has been no looking back. Over the years, Junaid wore several hats through various business functions and marched his way up the organization to be appointed in 2019 as General Director of the new packaging films venture of Flex Films in Russia.

At UFlex, Junaid started working with the Design, Production, and Sales & Marketing function of the Engineering business at the company’s headquarter plant where he learnt the finer nuances of business operations, financial management and market development.

End of 2011, he went on to oversee international marketing for Packaging Films Business of UFlex at Flex Films Europa in Poland and four years later, moved to Flex Middle East in UAE.

Junaid is credited with developing Russia & CIS markets for UFlex that eventually set the tone for company setting up its Greenfield manufacturing project in Moscow Region. Due to his market insights, conviction and focus to achieve customer satisfaction, Flex Films has evolved to grab the majority market share of BOPET films across Russia and UFlex today is the preferred supplier to the converting industry worldwide.

A production engineer and Post-Graduate in Technology of machine building from Kursk State Technical University, Junaid is currently focused on expanding the global footprint of the Packaging Films Business of UFlex, both in terms of operations as well as market. He spearheads a programme that aims at strengthening the company’s reputation of ‘ease of doing businesses’ among all its customers.

Our Awards and Recognitions